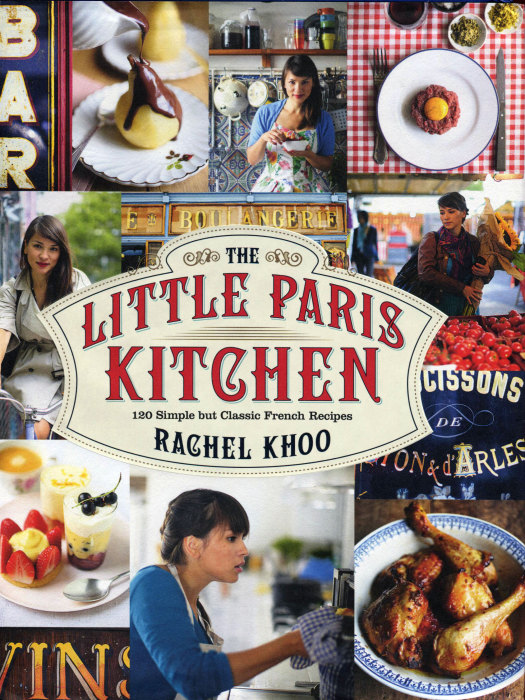 Looking at our calendar, it seems Suzi and I won’t make it to Paris this year. What to do? Well, this week’s TBT Cookbook Review can give you a virtual tour of Paris with amazing food ideas.

The “Little” in the title refers to the small kitchen in Paris where author Rachel Khoo experimented, perfected and began a soaring career. There is nothing little at all about this very big book.

Born in London to a Malaysian Chinese father and Austrian mother, as a young adult she found herself in Paris, looking. Looking at what? What else? Gazing at the patisserie products. In Paris it sometimes seems that every block begins and ends with a patisserie, while a candy shop and butcher store occupy the middle spaces. In a food rich city, she appears to have been both overwhelmed and inspired.

She enrolled at Le Cordon Bleu, worked as a nanny, sold cookbooks, taught cooking classes and began a very spectacular culinary ascent. She has two books in French and two BBC cooking shows but this book, The Little Paris Kitchen, published in 2012, has been a worldwide bestseller and award winner. People in over a dozen languages, from French to Russian to even Latvian and Mandarin, can all enjoy the 120 carefully crafted recipes in The Little Paris Kitchen.

The recipes include classic French wonders, done in her style, for example, Spring Lamb with Carrots, Peas and Green Beans. There are Rachel’s own imaginative twists on French cuisine, like the Champagne Sabayon with Strawberries and Cherry Tomatoes. These are the recipes of the French home, not the starred restaurants.

And then there are all the wonderful recipes Rachel provides that will bombard you with surprising combinations:

Did you once love mac and cheese but then tired of the starch and dense cheese? You need to try

Do you need a side dish with dash and both sweetness and bite? Consider

Are you craving a dessert with tang and heat? Then you’ll adore

In this last dish, grapefruit curd — and not lemon — is poised atop a classic Breton style biscuit. This dessert continues a great French tradition: the love affair with the pamplemousse, a much more adorable name than “grapefruit.”

Rachel has learned, with dedication beginning at Le Cordon Bleu, all the classic elements of French cooking. In this serious book, sometimes she will conservatively display her nuanced version of a classic, say her Quiche Lorraine or her Chicken and Mushrooms in White Wine Sauce.

At other times, Rachel seems to delight in her twists and turns. Her Croque Madame is not a sandwich complete with fried egg. It’s offered as bread in a muffin tin forming a shell for Mornay sauce plus the requisite egg. You’ve had a Madame before and thought it was rich? This version doubles down on cheese, flavor and culinary intensity.

Browse the pages of The Little Paris Kitchen and you will wish you were there in Paris, for a return trip or a first trip. But, no, you are home right now. Not in Paris. You are however just a few ingredients away from enjoying the best in Paris home cooking. Pick a recipe, any recipe, and you can imagine that you are truly home, back in Paris.