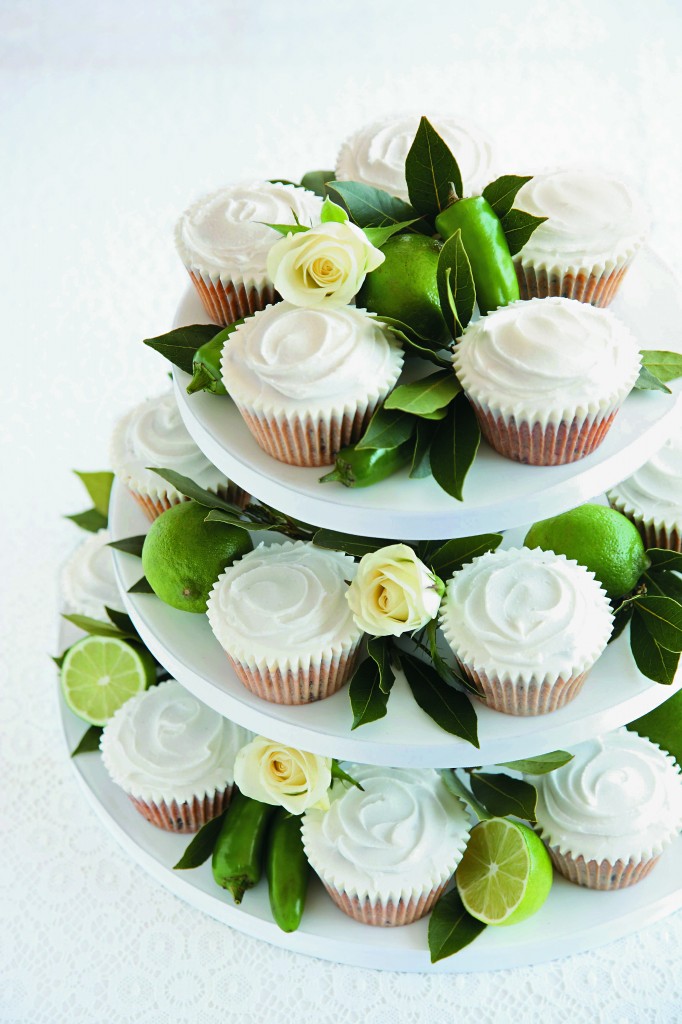 We think of weddings as “June” or “summer.” And it is true that “the event” most often occurs in those perfect months. But engagements spike in January and February. And the planning is hot and heavy from now through the great day.

After the ceremony itself, after the dress, it is often the cake that is the focus of attention — both on wedding day and way before. Around the world, wedding cakes are topics of attention and artistry. And, too, often objects of stress and cost.

For all the effort that goes into them, wedding cakes are often a tad disappointing. Did I say that carefully enough? Who wants to end the night consuming something tasteless, dry, and a replacement for cardboard?

Part of the issue is the engineering. Making a cake for 30, 50, 100, or more people is hard. Not many craftspeople actually have the skills to do it well.

But we can all do cupcakes. We can all find people who are fully skilled at cupcakes. And now we have Wedding Cupcakes by Joanna Farrow, a slim book with stunning ideas. Here each guest can have their own lovely personalized cake, a grand cupcake. The ensemble of cupcakes can create a dramatic effect, and each one can be “unique” with its own share of the decorations.

The picture above is a typical example from Wedding Cupcakes. Here, very simple cupcakes — but delicious ones — are assembled with limes, chilies, bay leaves and roses into a green and white tower that befits any celebration.

If you have a wedding in your future, or you know someone who does, these are exciting ideas to enrich that most important event.

These cakes are lightly decorated themselves but the surrounding herbs, fruits, and flowers combine to create a stunning display. Each cupcake is topped with an apricot-brandy glaze, then a round of marzipan, then finished with royal icing. That icing provides a sheen to match the roses added to each layer of this tiered display.

The suggested cupcake here is a rich fruitcake [recipe below], but feel free to substitute other concepts, such as a pure white.

To prepare the baked cupcakes, press the apricot jam through a sieve into a small bowl and beat in the brandy or liqueur, if using, or 2 tablespoons water to make a glaze. Brush the glaze over the cakes.

Roll out the marzipan to ⅛ -inch (2.5-mm) thickness on a surface dusted with confectioners’ sugar and cut out circles using a 2-inch (5-cm) cutter. Place a circle of marzipan on each cake, rerolling the trimmings, if necessary, to make enough.

Using a spatula, spread the royal icing over the cupcakes.

To finish and assemble, arrange the cupcakes on a tiered stand, leaving a little space in between each. Tuck bay leaves around the cakes, then add the limes, some halved, chilies, and roses. To make the roses stay fresh-looking for several hours, cut the stalks down to about 3 inches (7 cm) and enclose the cut ends in moistened cotton balls. Seal with plastic wrap before tucking the flowers between the cupcakes, hiding the cut ends under the other decorations.

Choose this recipe if you want a cupcake wedding cake but a rich and fruity cake base that can be topped with marzipan before decorating. Like a traditional rich fruitcake, the cupcakes can be pierced with a toothpick after cooling and drizzled with extra brandy, sherry, or orange liqueur, allowing for about ½ teaspoon for each cupcake.

Put the mixed dried fruit in a bowl and drizzle with the brandy, sherry, or orange liqueur.  Cover and let stand for 2–3 hours, stirring once or twice until the liquid is absorbed.

Cream together the butter and sugar until light and fluffy. Gradually beat in the eggs, a little  at a time, adding a spoonful of the flour if the mixture starts to separate.

Divide among the baking cups, filling them almost full, and level the surface. Bake for about 35 minutes until risen and just firm to the touch. Let stand in the pan for 5 minutes, then transfer to a cooling rack to cool.

Royal icing can be spread over cupcakes or used for piping decorations. It keeps well for several days in the refrigerator  if you seal the surface with plastic wrap to stop a crust from forming. Beat well before using.

Put the egg whites in a large bowl with a little of the confectioners’ sugar and beat well with a handheld electric mixer until smooth. Gradually beat in the remaining sugar until the icing forms soft peaks when the beaters are lifted from the bowl. Cover the surface with plastic wrap until ready to use.