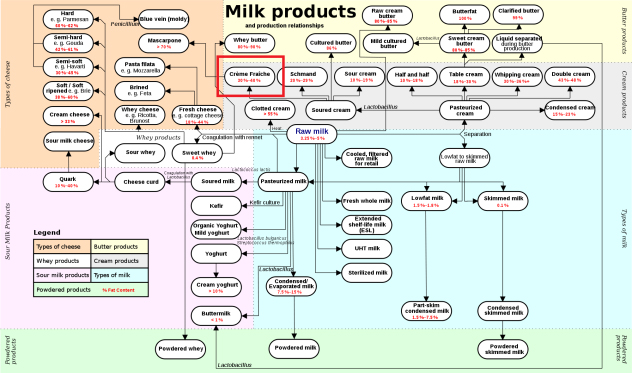 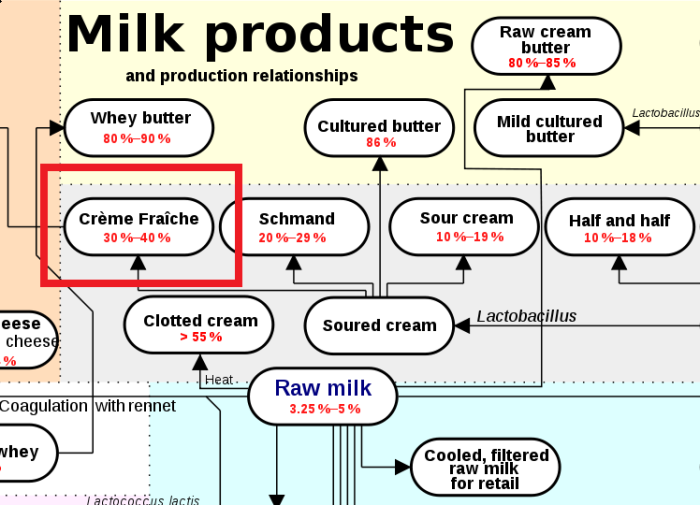 They are not the same. Yes, you can substitute one for the other, but you pay a price in culinary consequences. You can make faux crème fraîche, but it’s faux, and you really should journey to your store.

The two graphics above provide some background. I’m sorry but I cannot find a “big” version of the top chart, showing the full industry life cycle of raw milk. The second graphic is a blowup of the central portion of the first graphic and shows the key information.  Basically, cream is extracted from the milk. That cream is treated with the bacteria lactobacillus to create soured cream. From that base of soured cream can come three products:

Schmand is found in central and eastern Europe, often goes by the name smetana and actually can have butter fat outside that 20-29% range.

All three products are used for a variety of culinary tasks. The great differences in butter fat content has consequences: their flavor, their cooking characteristics, and the care you must show when using. Your recipe and its preparation techniques should naturally vary.

Creme fraiche has a less sour, more sweet flavor than American sour cream. You can make your own creme fraiche, of course. For example, beginning with sour cream and NOT heavy cream, add 1 to 2 tablespoons of buttermilk per cup of sour cream. Heat the mixture over the stove until it is just barely warm, stirring to mix the ingredients. Store in a covered container — but not airtight for 24 to 26 hours — and then refrigerate or up to 10 days.

That recipe comes from the website ehow.com. Very nice people. Very nice website. But I have to tell you that playing with dairy this way can be just a tad risky. You can drive to the grocery store or you can be driven to the emergency room. I propose you just go to the store.

There are, by the way, other recipes for faux creme friache: for example,  [1] heavy cream + yogurt or [2] heavy cream + sour cream. All these recipes involve having your faux product standing around at room temperature before putting in the refrigerator. The issue of rogue bacteria again comes into play, if not into your life.

As a scientist, I was always the theory guy, the geek at the blackboard. I was terrible in the lab. Chemistry professors did not like me. Suzen, well, Suzen loves me but has rules, like, “Do not attempt to kill me.” And, yes, if something goes wrong here at room temperature and you are going to have an unpleasant gastric experience. Just drive to the store.

You can the simpler path and just substitute sour cream for crème fraîche, but then you have some other rules to follow. Crème fraîche is better at handling high heat. If you boil sour cream, then it will curdle, so you have to watch the heat carefully if cooking with sour cream for a recipe meant to use crème fraîche. Again, drive to the store.

In the United States, any milk product that is going to cross state lines has to be pasteurized, killing the indigenous bacteria. In France, the home of Louis Pasteur, the milk is often not pasteurized. So the bacteria added to get crème fraîche are added on top of the bacteria already in the milk naturally.

In short, American-made crème fraîche cannot be the same as the French original. Different cows, different grasses, different milk, different bacteria. From that perspective, don’t even bother going to the store. Go to Normandy, where by reputation the crème fraîche is the best.

Crème fraîche with a Norman tart tartin. That combination cannot be surpassed.