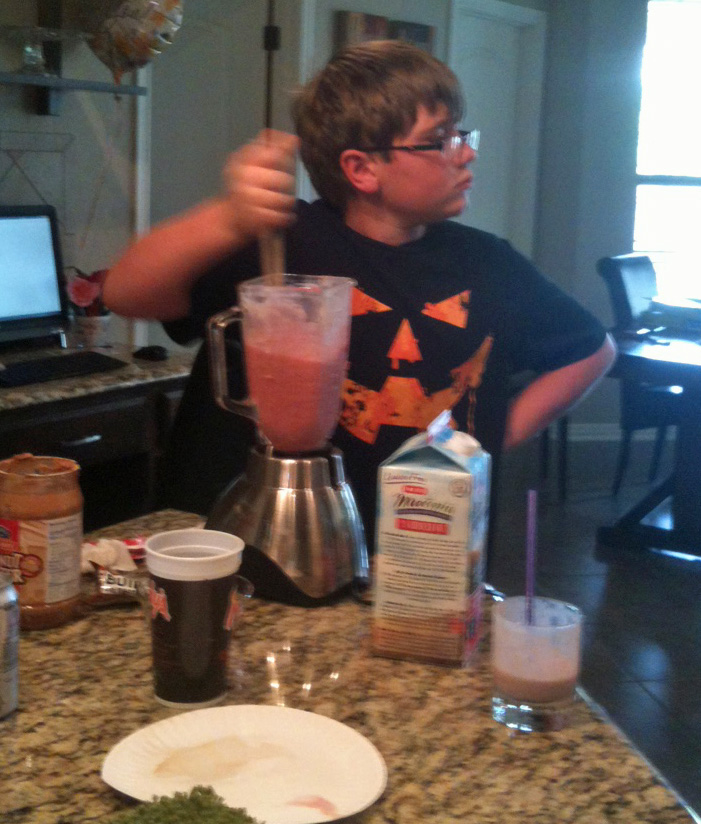 My twin grandsons are mirror twins. That’s like being a SUPERTWIN. They look alike, but they “mirror” certain things. One is right handed, and his mirror brother is left-handed. One is artsy, and one is analytical. One is destined to be a chef and the other will be his lawyer.

That’s Chef Daniel in the picture. His brother, Reid, is on the sofa to the right, out of sight. Reid is watching TV. Actually, so is Daniel, which helps explain why this smoothie took 45 minutes to make.

Reid had asked his mother, Michele, for a smoothie. She made him one. Reid, who may turn out to be a food critic and a lawyer, said he did not like it.

“I’ll do it,” said Daniel. That’s when the clock started. Like his father, Daniel is a natural cook but a very meticulous one. He did not use a cookbook here, he did survey every shelf in the refrigerator and freezer and pantry for ingredients, and he was taste testing along the way.

He created the smoothie below. Because Daniel is already preparing his own private collection of recipes, I cannot reveal here the exact proportions of ingredients, but Daniel did agree to share the ingredient list. With Suzen, we have guestimated the ingredient amounts shown below. Daniel may, in the future, choose to share some of his other recipes. Suzen and I will strive for full disclosure.

Oh, Reid tasted this new smoothie and still was a tad dissatisfied. “Too cold,” he commented.

These guys may be mirror twins, but they do share one characteristic: they are total perfectionists. Twenty years from now, you really will be astonished at the food in Daniel’s restaurant while you sit with Reid going over every detail of the contract he has drawn up for you.

As their grandfather, all I can do is hope for a discount.