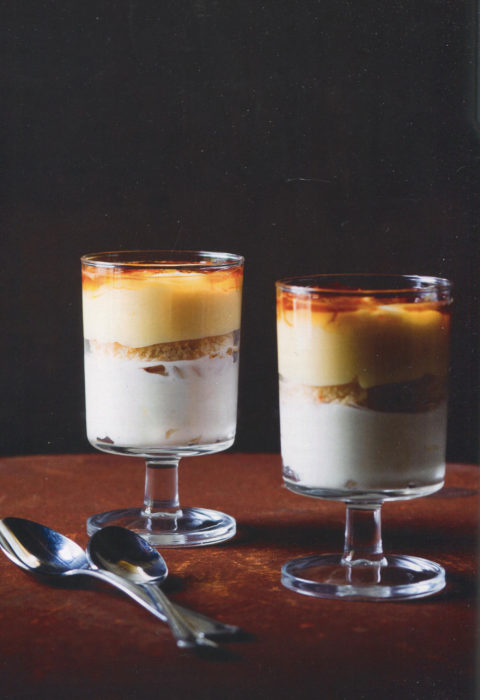 The Basque region in Northern Spain [and a wedge in Southwestern France] is an intriguing area. Different language, distinct culture. Analysis of genetic pattern indicates that the Basque people are an indigenous group that has been there for several millennia. Recorded history has them there over two thousand years ago. Genetic history suggests seven thousand years.

Over the years, cultures in Western Europe trade recipes and often implement some local changes. Goxua, or Basque Trifle, is very similar to tiramisu with a different topping: sponge cake is soaked in rum, layered with both pastry and whipped cream, and then crowned with crunchy caramel.

Rich is barely descriptive. If you have had so much tiramisu you are getting a little bored, why step it up with caramel?

This recipe comes from the important Basque Country by Marti Buckley. Marti has devoted heart and soul to a most authentic portrayal of the food, the people and the land of Basque country.

For the pastry cream:

For the pastry cake:

Make the pastry cream: In a medium saucepan, combine the milk, lemon zest, and cinnamon stick. Bring just to a simmer over high heat and remove the mixture from the heat. Set aside to infuse for about 10 minutes.

In a bowl, whisk the egg yolks and granulated sugar vigorously, until they begin to lighten in color and are thick and creamy. Whisk in the cornstarch.

Remove the cinnamon stick and lemon zest from the milk. While whisking, carefully pour about half the milk into the egg mixture and whisk to combine. Return the egg mixture to the saucepan with the remaining milk. Return to medium heat and cook, stirring vigorously with a whisk to avoid lumps, until the cream begins to thicken, about 5 minutes. Remove from the heat and whisk in the butter until melted and combined.

In a large bowl using a whisk or a handheld mixer, beat the egg whites until they hold stiff peaks.

In a separate large bowl, whisk together the egg yolks and½ cup plus 2 tablespoons (125 g) of the granulated sugar. Sift in the flour and stir to combine. If the flour is difficult to incorporate, it may be the egg yolks were a bit on the small side. In that case, add the milk and continue incorporating.

Gently fold the egg whites into the mixture until just combined.

Pour the batter into the prepared baking sheet, smoothing the top. Tap it once on the counter to remove any air bubbles. Bake for 8 minutes, or until a toothpick inserted into the center comes out clean. Let cool before using.

In a medium saucepan, combine½ cup (120 mL) water,½ cup (100 g) of the granulated sugar, and the rum and bring to a simmer over high heat. Cook until thickened, about 5 minutes. Remove from the heat and let the syrup cool slightly.

Cut circles out of the cooled cake that correspond with the size of your serving vessels. With a pastry or kitchen brush, paint each circle of cake with the spiked syrup. Allow to soak in the cake for a few minutes, then paint the cake again.

In the bowl of a stand mixer (preferably chilled in the freezer beforehand) fitted with the whisk attachment, combine the cream and confectioners’ sugar. Beat until the cream holds stiff peaks. (Alternatively, whip the cream in a large bowl with a whisk or handheld mixer.)

Divide the whipped cream among six parfait glasses, to create a nice base. Place the soaked cake on top of the whipped cream. If desired, paint the cake once more with the spiked syrup. Divide the pastry cream among the parfait glasses. Sprinkle the remaining½ cup (100 g) granulated sugar evenly over the top of each. Hold the flame of a kitchen torch just above the sugar and move it in circles until the sugar melts and then caramelizes into a thin layer. Serve immediately.