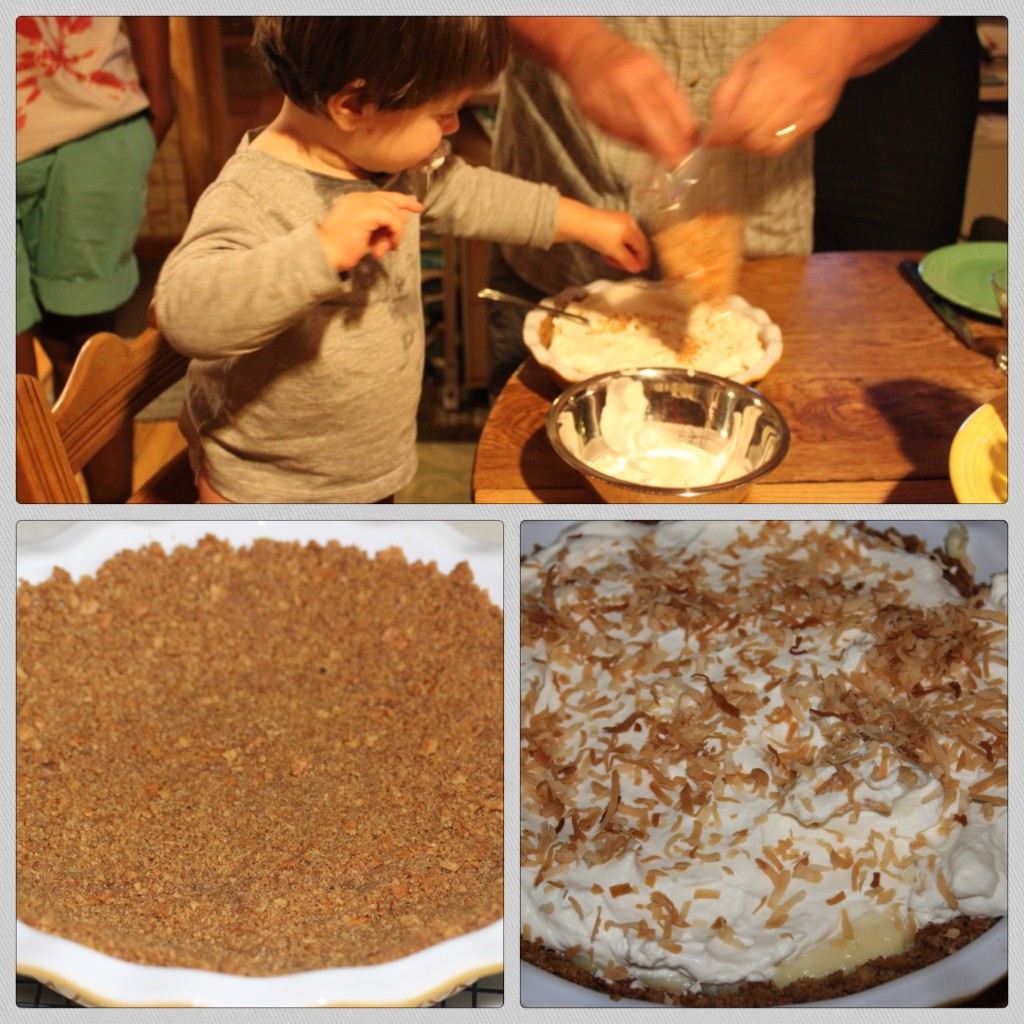 There may come the day when you begin to think that your spouse is as smart as you are. Or, smarter. It’s a matter to reflect on.

I know Suzen is smarter than I am. I simply refuse to acknowledge it. It’s not that she has an ego. I just don’t want to open the door any wider than it is.

Yes, husbands have pride, too.

Suzen has a very deep philosophy about cooking, about the power of the kitchen as the ideal place for communication and learning. I have seen her develop teambuilding programs for adults, using the kitchen as a metaphor for life. I’ve seen and I’ve believed, but now I’ve experienced.

How do you bond with a little kid? That boy in the picture is Zachary, the son of Suzen’s cousin-one-removed from Paris. [If you don’t know what cousin-what-removed means, then look up cousins in Wikipedia. Zachary is not a second cousin. That’s if I understood the mathematics in the Wikipedia article correctly!]

It’s my second time with Zachary and at two years of age, he’s naturally shy. So, again, how do you bond? After extensive experimentation, Suzen has determined the food that is best for bonding with young children. You may have heard of it before: whipped cream.

I got to Zeva’s place with a lug holding the core pie, a bowl of whipped cream, and a bag of freshly toasted coconut. “Zachary,” I said, “I need help. We need to complete this pie.”

Living in Paris, I doubt that is a sentence the two-year old had heard before. Not even if you substitute “tart” for “pie.”

I needed to demo. I took up a big spoonful of whipped cream and dropped in on the pie and spread it out with the back of the spoon. Zachary watched. I took another. Then another. Then, as proof of his great intelligence, and with no verbal prompting, Zachary literally grabbed the spoon from my hand, scooped up a mountain of whipped cream and plopped it on the pie. I had to do the spreading, actually. That’s how you learn: one motor skill at a time.

Further to his credit, all the whipped cream went to the pie. None to his mouth. I don’t have that control.

In the picture above, we are past the whipped cream stage and Zachary is helping me spread the toasted coconut. Zeva took the picture and I think she had the speed wrong, which is why my hands are blurry. I don’t shake that fast at all.

I would bet, bet a lot, that you have never made your own coconut cream pie. This recipe, from Pie by Ken Haedrich, is awesome. On my first bite, I honestly thought this is best pie I have ever made, ever tasted. It’s so easy, I feel like an idiot for only having tried cream pies from restaurants or bakeries before. Some were good, some were old. This was heavenly and fresh.

Everyone at the table, and I mean everyone, said this pie was a wonder. That crust picture is the graham cracker crust, also from Pie but my thicker version, that I blogged early.

As I said, everyone loved the pie. Zachary said something to me. It was in the French of a two-year old but it sounded remarkably like “more.”

Ah, two notes. This recipe calls for coconut extract. You have some, right? Neither did I. So, I used some caramel extract, from one of those unopened bottles in the back of my shelf. It was right there next to the purple food coloring I bought for some reason. Anyway, caramel was fine. You can always improvise.

And, the recipe here calls for toasted coconut. Ken Haedrick has ideas about that and I’ll post that tomorrow. In the meantime, yes, 10 minutes in an oven at 325⁰.

For the topping to be applied just before eating:

Whisk the granulated sugar, cornstarch, and salt together in a medium-sized heavy saucepan, preferably nonstick. Whisk in the milk and egg yolks. Place over medium heat and cook, whisking virtually nonstop, until the mixture thickens and starts to boil, about to 7 minutes.

[Note, the heavier and wider your saucepan, the sooner it will boil. Mine did in 4+ minutes. Keep the heat on medium to medium-low so things don’t scorch.]

Continue to cook, whisking nonstop for about 1 minutes.

[Note, you will know, don’t worry. The cornstarch will kick in and the mixture will thicken very rapidly. You may want to lower the heat a tad, again to prevent scorching. And, as it thickens, the mixture will begin to cling to the sides of pan. That’s the reason for wanted a non-stick pan if possible. The parts that do stick may scorch so you want to be careful about what goes in the pie and what stays in the pan. Remember, you can always lick the pan before cleaning.]

Whisk in the vanilla, coconut extract and flaked coconut. Immediately pour the filling into the cooled pie shell and smooth the top with a spoon. Press a piece of plastic wrap directly over the filling, leaving no gaps or air pockets to prevent a skin from forming. Transfer the pie to a wire rack and let cool, thoroughly, then refrigerate for at least 3 hours or overnight.

[Note, this is one place where I take exception. After filling the pie, I would let it cool to down towards room temperature before covering with plastic wrap. The thought of very warm filling in contact with plastic is not one I’m happy with.]

When you are almost ready to serve the pie, whip the cream until it holds soft peaks. Add the confectioners’ sugar and beat until stiff but not grainy. Spread the whipped cream over the pie, as decoratively as you desire. Dust with the toasted coconut.

This pie will save well in a cold fridge for a day or two, but that is an unlikely experience.