Gingerbread in Our Jenn-Air Steam Oven 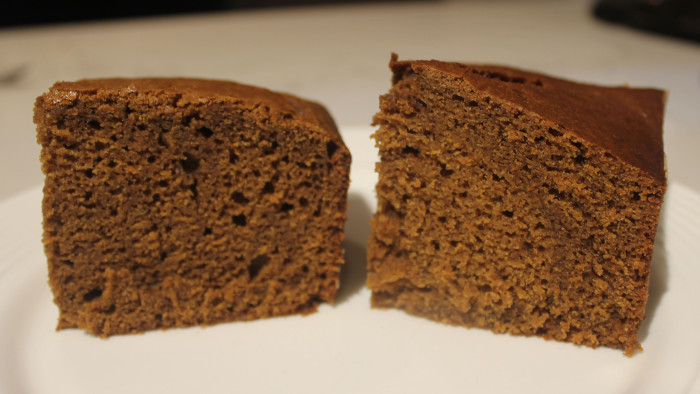 Our cooking school Cooking by the Book in Tribeca has a brand new kitchen. Our suite of appliances is now provided by Jenn-Air and we could not be happier with the look, utility and the taste from these ultra-modern appliances. With touch screen technology and embedded recipes and guidance, these appliances make cooking easier and more reassuring. Our students love the appliance features and the food they yield.

Each month Suzi and I will be giving you a special recipe and telling you how the Jenn-Air technology makes that recipe even better. Let’s start with the star of our kitchen: the Jenn-Air® Steam and Convection Oven.

You may have seen steam ovens in a showroom or on TV. Our model includes both convection and steam. You probably have two questions: why and does it make a difference? The answers are right there for you see in the photos. We baked the same gingerbread recipe in a Jenn-Air convection oven and in our Steam and Convection Oven.

The recipe, included for you here at the end of this post, is from Tish Boyle’s The Cake Book, a go-to volume for cakes large and small. We made two batches of batter, used the same pan, and cooked using convection in both ovens. But, in the steam oven, we used the Low setting for steam. The steam cake is on the right in both pictures.

What do we see? The Steam version of the whole cake has a darker, richer color. Yes, some deeper cracking but that is why God made whipped cream. In the second picture, the side shot, you see the key difference. The Steam cake is higher, lighter, less dense to the taste. There is a decided difference to the texture. Both cakes taste wonderful — it is a Tish Boyle recipe — but multiple people tasted the results and the steam version was judged to have a lighter, gentler texture.

What happened in that steam oven to achieve this? When you bake, the liquid in your batter includes water which boils and the resulting steam forms bubbles in the fabric of the dessert. But some of that steam will quickly evaporate right out of the cake into the oven. The sooner it evaporates, the less time it spends helping the cake leaven and you have a shorter cake.

The Jenn-Air steam oven includes a water container that generates steam in the heated oven outside of the cake. That steam does a couple of things. First, it helps produce that darker surface on the cake. Second, the presence of steam in the oven compartment slows down the evaporation of steam from the cake itself — it’s a bit of culinary magic that you may have missed in your high school chemistry class. It’s okay. The Jenn-Air engineers have figured out the chemistry and your Steam Oven touchscreen includes all the help you need for gingerbread success.

Or chicken success. Or vegetable success. The great benefit of steam cooking is that all the foods stay moister and lighter, and you get those results with no special effort on your part with your Jenn-Air oven.

Position a rack in the center of the oven and preheat the oven to 1 325°F. Grease the bottom and sides of a 9-inch square baking pan. Dust the pan with flour.

In the bowl of an electric mixer, using the paddle attachments beat the butter at medium speed until creamy, about 1 minute. Gradually add the sugar and beat at medium-high speed until light, about 2 minutes, scraping down the sides of the bowl as necessary. Beat in the egg and egg yolk one at a time, beating well after each addition and scraping down the bowl as necessary. Beat in the sour cream, vanilla extract and grated ginger. Add the molasses and beat for another minute. If your mixer has a splatter shield attachment, attach it now. Add the dry ingredients at low speed, mixing just until blended. Carefully add the hot water (it may splash up as you add it) and beat until smooth, scraping down the sides and bottom of the bowl as necessary (the batter will be thin). Pour the batter into the prepared pan.

Bake the cake for 50 to 60 minutes, or until a toothpick inserted into the center comes out clean. Place the pan on a wire rack to cool. The cake can be served warm or at room temperature.

Cut the cake into squares and serve directly from the pan.