The Saga of Doritos 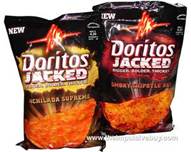 I was listening to Diane Rehm yesterday. Her daily two hour radio show on Public Radio has made her a broadcasting icon. It’s a remarkably wonderful show, typically spotlighting a current new item in the first hour and something cultural in the second. So in hour one, you might hear a discussion on Syria and in hour tool a review of a novel by Charles Dickens.

I love the show so much I was crushed yesterday when she said she hated the word “icon.” “Used too much. It’s silly,” she announced.

How can an icon herself say that? Most assuredly, icons can and do exist. There are iconic foods, things that help define a cultural or a society. And, an iconic food does not have to be “wonderful” in the flavor sense, or healthy, or dramatically beautiful. It has to be something iconic, something that any of us would instantly recognize and probably could taste in our brain without even taking one bite.

So, from time to time, I want to write about iconic food. And my first is the one that helped me get through junior high and high school. I clearly remember nights when I would just pour out a bowl, top with red hot sauce, and open a Pepsi. It seems I have been eating them all my life. Now, that’s iconic.

And, of course, it’s wrong. I did not eat them in junior high. Or in high school. Or apparently through most of college. Doritos did not land on our grocery store shelves until 1966. I was a senior in college. That timing came as shock one for me.

Now for shock two. Where did they come from?

Yes, it’s another All-American image brought to us from Disney. Seriously. Disneyland. There was a restaurant there called Casa de Fritos. At the end of the day, the restaurant took unused tortillas, cut them up, and fried them with seasoning. This first Doritos became a very popular regional food there in Southern California.

For a few years, manufacture was continued in Southern California but volume requirements overwhelmed that facility. Frito-Lay purchased the product rights and moved production to Tulsa.

Over the years, the shape and flavor has changed. Many flavors have been added. Look for the new “JACKED Enchilada Supreme” or the “JACKED Smokey Chipotle BBQ.” They can only be described as legal addiction.

In the mid-90s, the company spent $50 million to redesign the chips. How do you do that? How can it cost that much? Well, they made the chips larger, yes, larger, not smaller. And thinner so you could crunch quicker. More seasoning, more flavor, and rounded corners. Over 5,000 chip eaters were involved in the process.

Despite the redesign, lawyers did inevitably become involved. In 2003, a man sued for throat damage he said was caused by the shape and rigidity of the chip that made them inherently dangerous.

The lawsuit failed, and bags with almost twenty flavors still adorn our grocery stores. Personally, I would have testified for the defense as an expert witness. I would have gladly demonstrated product safety by consuming tons of chips before a jury or on camera.

In fact, I just want Frito-Lay that I am still available anytime they need help. Especially if some idiot complains about the JACKED brands, which by the way are even bigger and thicker.

The moral here? Next time you go to an amusement park and you pay tons of money for overpriced and under flavored food, just look around for the scraps. Someday, someone, somehow may convert them into a billion-dollar a year industry.