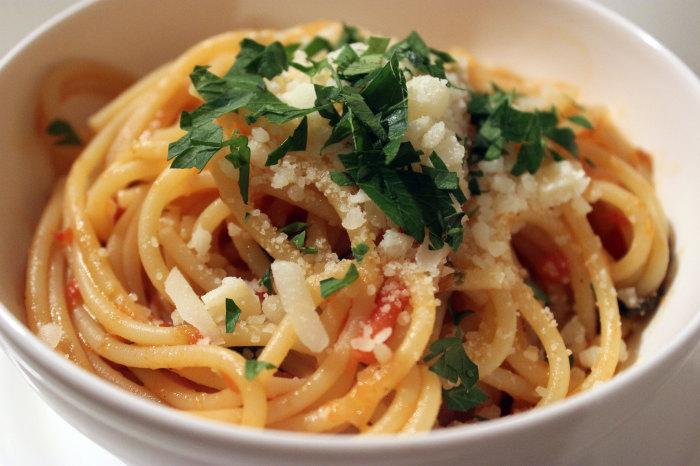 If I say “spaghetti” then what word is triggered in your brain? For many of us, “spaghetti” is synonymous with “meatballs.” Like Macaroni and Cheese, spaghetti and meatballs are inseparable and, of course, universal.

The truth is less simple, more complex. Many food historians and Italian ones by far believe that spaghetti and meatballs is an Italian-American dish, one fashioned in the 1920s where immigrants found abundance in America that they had never encountered in Italy. You can find that tradition today in, say, the Italian-American restaurants of Brooklyn where you can display your richness, and reward your appetite, by ordering a side of meatballs.

The meatballs-are-American is an interesting story and, according to Wikipedia and the Smithsonian, largely true but not totally true. In Southern Italy, in Puglia for example, there are written examples of recipes for pasta with meatballs preceding the 1920s American ones. Italian cuisine is complex and highly regionalized so it would not be unexpected to find some examples of pasta and meatballs somewhere in Italy. Those Italian meatballs, though, were called polpettes, often dainty in size and never the size of the gigantic ones you’ll experience in Brooklyn.

According to the Smithsonian, [http://www.smithsonianmag.com/arts-culture/is-spaghetti-and-meatballs-italian-94819690/?no-ist ], the immigrants who came to America in Italy had a totally revised economic experience. In Italy, they spent 75% of their income on food. In America, and that often meant the Lower East Side or Brooklyn, food required only 25% of their income. The immigrants had more money, more disposable income, and could get more for the money they devoted to food. They could afford meat and they could make meatballs, ones with more meat than bread filling.

With meatballs, sauce was in order. Marinara sauce gets its nautical name from the Italian word “marinaro” meaning sailor. The city of origin was, what else, Naples. The combination of spaghetti and meatballs and marinara quickly spread through first the immigrant community and then through the American population. Spaghetti and meatballs drenched in sauce became emblematic of Italian food. American tourists fresh off the plane in Rome would go in search of the “best” spaghetti and meatballs they could find.

They tended to find stares and shaken heads.

The dominant style in Italy is spaghetti with that sauce. But no meatballs.

How, how can we be so “advanced” in our Italian-American cooking while those Italian people seem to lag behind? What is going on?

That photo above is worth, if not a thousand words, at least a few hundred. Italians have an advantage called Italian pasta. The terroir of Italy affects not just the wines but also the wheat. The premier Italian pasta makers, like Felicetti and Barilla, make products that are best described as “self-satisfying.” You literally do not need a meatball to have a totally exemplary dish. The taste and texture of the pasta form an unsurpassed foundation for a pasta dish like, say, spaghetti. Top that pasta with a great homemade sauce, perhaps some cheese, and your meal is complete. There simply is no need for meat to have the feeling that your meal has been “complete.”

Italians, of course, know this, which is why they can sit quietly sipping their wine, discussing the American tourists, and shaking their in laughter-filled bewilderment. Money can’t buy love, someone said. Money can buy meatballs, but sometimes you just want to save your money.