Cabbage Rolls with Tomato Garlic Sauce from The Slanted Door 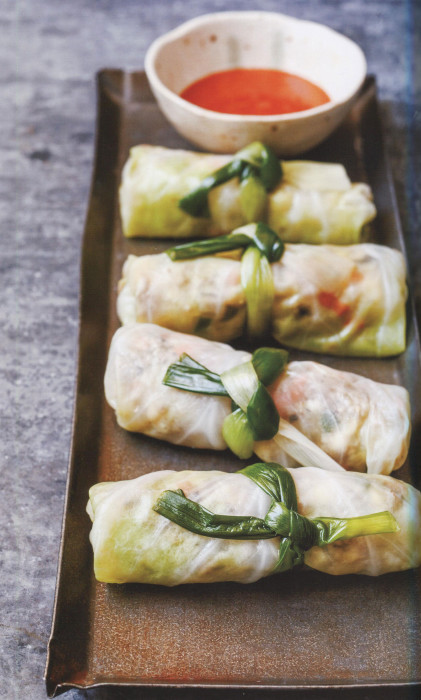 Wednesday I did a cookbook review for The Slanted Door, a book featuring the recipes of Charles Phan and his marvelous San Francisco restaurant. The restaurant, a mecca from the day it opened for twenty years, offers Charles’ very refined blend of his native Vietnamese heritage with the influences of San Francisco — the ingredients, the techniques, and the styling.

It’s a beautiful book. Oversized with color photos of every recipe. This one, a “simple” cabbage roll is a dish that will take you a weekend afternoon to prepare. There are 25 ingredients between the rolls itself and the sauce. The filling inside that cabbage role is rainbow of flavors and textures: pork, corn, and jicama. Yes, jicama. Like I said, it’s a San Francisco restaurant and Charles is one very distinguished chef.

To make the dipping sauce, in a skillet over medium- high heat, warm the oil until shimmering. Add the garlic and stir until fragrant, about 30 seconds.

Add the tomatoes and continue stirring for another minute. Add the shallots, ketchup, oyster sauce, fish sauce, Thai chiles, and sugar and cook until the sugar is dissolved. Transfer the mixture to a blender and carefully blend at medium speed until the tomatoes are broken down. The sauce can be made ahead. Reheat in a skillet and stir in the cilantro and green onions just before serving.

To make the filling, heat a wok over high heat until a drop of water evaporates on contact. Add the oil and heat until shimmering. Add the onion and garlic and cook until fragrant, about 30 seconds. Add the pork, jicama, carrots, mushrooms, and corn and continue stirring for a minute. Add the fish sauce, sugar, pepper, and salt. Cook, stirring, until well combined and the pork is cooked through, about 2 minutes more. Remove from the heat and set aside.

Bring a large pot of water to a boil over high heat. Separate the cabbage leaves by snapping them off, one by one, from the core. Place a few leaves at a time in the boiling water and blanch until they are soft, about 2 to 3 minutes. Using a spider, remove the leaves from the water, cut off the thicker parts of the stem, and set aside to drain. Blanch the green onions in the boiling water until soft, about 15 to 20 seconds. Cut the bottoms off so only the green parts remain, and set aside to drain.

To assemble the rolls, lay a piece of cabbage on your work surface. Place about ¼ cup of the filling toward the bottom of the leaf, fold the sides in, and roll from the bottom toward the top to create a fully enclosed cigar-shaped roll. Tie the roll with a green onion stalk. Repeat with the remaining cabbage and filling, adjusting the amount of filling to the size of the leaf.

Set up a steamer and steam the rolls until heated through, about 5 minutes. Serve warm alongside the dipping sauce.