Piquillo Mostarda for the World’s Best Hotdog [even better than Roakes!] 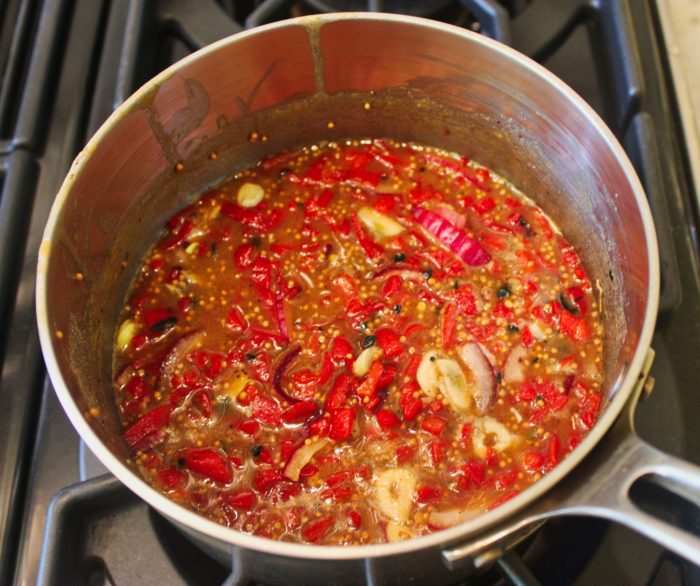 There have been several posts and lots of comments here about hot dogs, specifically the Chili Dog from Roakes Coney Island stand just south of Portland, Oregon.

I grew up a mile away from Roakes and from age 8 to when I graduated from college at 22, I ate them weekly. I’d order three at a time. I can taste the dog righ t now and that glorious hot dog sauce.

It’s now 50 years since I left Portland and whenever I have returned to my hometown, I always include a stop at Roakes. My wife has been saying, “Nathans are better.” She’s from Brooklyn and it is only because I deeply love her that I have allowed the silly Nathans comparison to pass with merely a grimace. East Coast snobbishness at its ultimate.

Roakes were better than Nathans or anything else. Verb tense matters here. Were better, not are better. Over the years, the stand has stayed the same, but ownership has changed a few times and the sauce now, most sadly, is but a shadow of itself. I had a dog there last year and I was ready to cry. It was dull and muted. It may seem foolish to mourn over a hot dog, but you can and I have.

I mourn no more. What I’m presenting here is not just as good as Roakes. It’s better. This is the best hot dog in the world. It’s in the new book The New Spanish, reviewed here, based on the restaurant Huertas in Lower Manhattan.

When I took Suzen to Huertas two weeks ago, we got their Basque Dog. It’s served with this sauce, some aioli, and the restaurant’s own version of a Spanish chistorra sausage. That’s Basque sausage, similar to chorizo, but ground more firmly and tightly packed into a lamb casing. Don’t worry, with this mostarda, any dog will do.

Suzen took one bite and teared up. “Oh, my God. Best ever.” If you get that verdict from a Brooklyn girl, you should take it seriously.

This mostarda makes the dog so grand, but it can serve as so much more than just dog relish. Use it with burgers or steaks or chicken. Hell, put it in your baked potato.

I warn you now: addiction is a certain thing. And if you mourned Roakes, you can now rest easy and happy.

That aioli used at Huertas is quick and delicious: 2 cups of Hellman’s mayo as a base, then 1-2 grated cloves of garlic, a teaspoon of lemon juice, a tablespoon of olive oil and a teaspoon of salt. It’s quite lovely but dominated by this mostarda.

To make the mostarda, in a large pot, combine the mustard seeds, mustard powder, sugar, salt, white wine vinegar, and sherry vinegar. Bring to a simmer, stirring to mix well. Cook until almost syrupy and reduced by half, about 30 minutes. Add the peppers, onion, garlic, and thyme. Return to a simmer and cook for about 30 minutes longer.

Let cool to room temperature, about 1 hour, and then if desired, stir just enough Dijon into the mostarda to give it a strong flavor (start with 1 tablespoon). Store the mostarda in an airtight container in the refrigerator for up to 1 month.