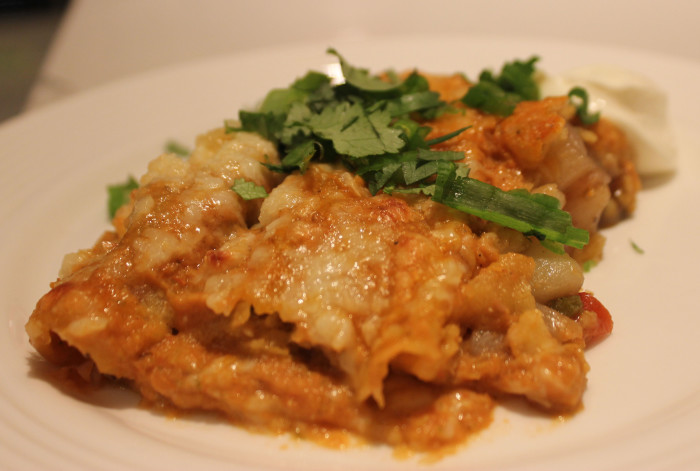 “We’re doing enchiladas tonight,” my wife Suzi announced. She smiled and there was no hint of deception there. Little did I know.

Later that night, I was given a first course plate with two enchiladas covered in sauce. I cut one open, notice something green, assumed it was a chile, and took a bite. How unusual. I opened the enchilada, looking for the meat. Where was the chicken? Or maybe, she had gone upscale, and there would be duck. We’d just had a big turkey and leftover turkey meat would be terrific.

No meat. Just potatoes and zucchini. My wife had gone vegetarian, for at least one dish.

At her cooking school Cooking by the Book Suzi has corporate groups come into our kitchen for culinary team building. The entire group is broken into team, each team prepares and one dish, and the group retires from the kitchen to the dining room to celebrate their culinary success.

Suzi has a menu for groups to select from and, God bless them all, people are picking these enchiladas like mad. Does anyone complain about the lack of meat? No. Not a soul has.

So, I’m not about to get in trouble over this. And, actually, I really do like the potatoes with the habanero sauce. It’s raging hot and is as blunt a complement to the placid potatoes as you could imagine.

This dish will surprise you. Trust me. I was.

If like the flavor and diversity of this dish, then by all means survey the wonderful cookbooks from Curtis Stone. His name is Stone. The books are gems.

Yield: serves 6 to 12 ranging from appetizer to main course

To make the salsa and filling, preheat the broiler.

Meanwhile, remove the leaves from the cilantro and place the stems in a blender. Coarsely chop the leaves and reserve in a medium bowl. Add the whole garlic clove, the broiled tomatoes, Habanero, and any accumulated juices to the blender and blend until smooth. Season the salsa with salt. Set aside.

Heat a large heavy skillet over medium heat. Add 2 tablespoons of the oil, then add the potatoes and cook for about 5 minutes, or until they are beginning to soften. Add the zucchini, onion and the chopped garlic and sauté for about 5 minutes, or until the potatoes are tender. Stir in the chopped Anaheim chilies and ¼ cup of the salsa and season to taste. Set aside to cool.

To assemble the enchiladas, preheat the oven to 450 degrees. Line a small baking sheet with paper towels.

In a small skillet, heat the remaining 4 tablespoons olive oil over medium heat. Add 1 tortilla to the pan and cook for about 20 seconds per side, or until just pliable. Using tongs, transfer the tortilla to the paper-lined baking sheet to absorb any excess oil. Repeat with the remaining tortillas, layering them between paper towels.

Spoon about ⅓ cup of the potato mixture over the bottom third of the tortilla, then roll up and place seam side down in a 13 x 9-inch baking dish. Repeat with the remaining tortillas and filling.

Bake the enchiladas, uncovered, for about 10 minutes, or just until heated through. Reheat the remaining salsa.