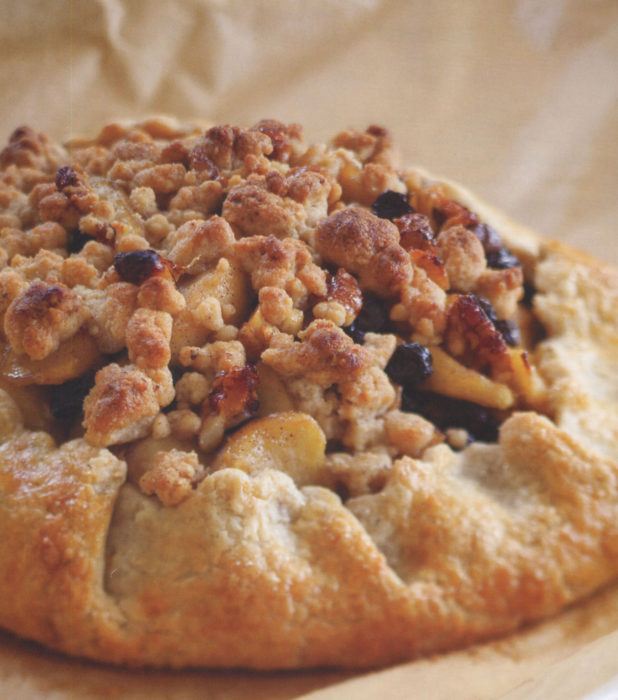 From a couple of years ago comes this fall and apple idea. Yes, we all want our apple pie. We will have one more this holiday season. But, but, there is more to life. A crostata is an elegant variation on pie. And, I might add, a heck of lot easier to make. Here the crust has a special flour and herb to make it brightly different and certainly festive.

This for Thanksgiving? Do it. You will be thanked. [But don’t compromise on that pumpkin pie!]

In her magnificent latest book, Flavorful, Tish Boyle goes to the max in fashioning grand desserts. The book is devoted to her, and probably yours, favorite flavors. We all seem to tend to vanilla and coffee and caramel. And apple.

I’ve already posted Tish’s Apple Croissant Bread Pudding. Here’s a peer dessert, an Apple Crostata with Whole Wheat and Rosemary Crust. The French make galettes and the Italians make crostata. These are open-face tarts. Now, as an American, I have at times felt cheated here. I like my pie and my pie crust and my pie crust that covers the entire top. But, in consideration, the open face does make for a grand presentation of the fruit.

Here Tish has made the crust “rustic” by employing whole wheat flour and fresh rosemary. Have you ever made a pie or crostata and had an issue with excess fluid? Well, Tish adds a sprinkling of panko bread crumbs that protects the crust from becoming soggy and heavy.

One downside to this recipe: Tish says it does not store well at all. You have to consume it on the day you bake it. Sorry, but you’ll be having seconds.

Here’s my review for Flavorful.

1. Place the flours, rosemary, sugar, and salt in the bowl of a food processor and pulse a few times to combine. Add the butter pieces and toss lightly with a spoon to coat them with flour. Blend the butter and flour with about five 1-second pulses, or until the mixture is the texture of coarse meal with some butter pieces the size of peas. Sprinkle the water and vinegar over the flour mixture and process continuously until the dough begins to clump together. Do not over process; the dough should not form a ball on the blade. Turn the dough out onto a work surface and shape it into a thick 4-inch- wide disc. Wrap the dough in plastic wrap and refrigerate until firm enough to roll, about 1 hour.

2. Place the unwrapped dough on a lightly floured work surface. Roll out the dough into a 12-inch circle, lifting and rotating the dough often and dusting the work surface and dough lightly with flour as necessary. Roll the dough up on the rolling pin and unroll it onto a baking sheet. Refrigerate the dough on the sheet while you make the topping and filling.

3. In the bowl of a food processor, combine the flour, walnuts, brown sugar, cinnamon, and salt and process until the walnuts are finely ground. Add the melted butter and pulse the machine until the mixture is crumbly. Set the topping aside.

4. Preheat the oven to 375°F. Melt the butter over medium-high heat in a large skillet. Add the brown sugar, apple juice, apples, and cinnamon and cook, stirring, until the apples have softened but still offer a slight resistance when pierced with a fork and the liquid is reduced to a syrup, about 5 minutes. Remove the skillet from the heat and stir in the walnuts, raisins, lemon zest, salt, and Calvados, if using. Set aside to cool for 10 minutes.

Assemble and bake the crostata:

5. Brush the egg wash around about 1 inch of the outer edge of the chilled dough round. Sprinkle the bread crumbs in the center of the dough, up to the egg-washed border. Spoon the apple filling over the crumbs. Fold the egg-washed edge of dough over the filling. Sprinkle the apple filling with the streusel topping. Brush the edge of the dough well with the egg wash.

6. Bake the crostata for 25 to 30 minutes, until the pastry is golden brown around the edges. Let cool on the baking sheet for 10 minutes, then transfer the crostata to a serving plate and cut into wedges to serve.