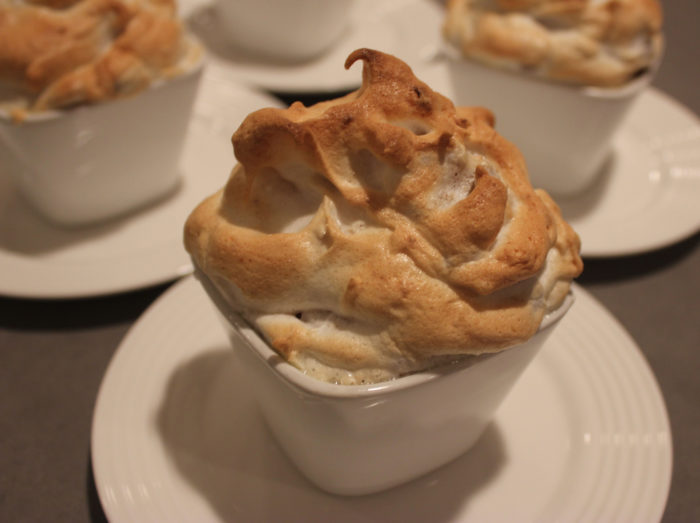 Today’s TBT recipe is just a couple of years old. I’m mentioning it again so soon because this is heavenly dessert, while harsh on the arteries, is sublime in your mouth. It’s the closest thing to dessert heaven you will ever encounter. Bread pudding topped with meringue and sided with whiskey sauce. It really won’t keep so if you have leftovers, consume on the spot.

Commander’s Palace in New Orleans opened in 1880. It soon became a New Orleans institution and then an American one.

In almost a century and a half, the generations of staff at Commander’s have developed, honed, and perfected many recipes. Want the best Bloody Mary in America? Go to Commander’s where you can enjoy that beverage in their gracious restaurant setting.

After your meal, surely you must sample the best of their desserts, this magnificent bread pudding. Actually, you don’t have to go to New Orleans. You can make this opulent treat right at home.

The preparation requires a double-dip in your oven: first baking a bread pudding, then combining it with meringue for a second quick but definitive round of heat.

But what kind of heat? The perfect meringues you see in that top picture were baked in our Jenn-Air® Steam and Convection Oven shown in the second picture. For this dessert, you don’t want the steam feature for the meringue, but you do want that convection heat, driven by a powerful fan system, generating a grand meringue finale. A Parisian pastry chef could do no better. The combination of this recipe and the Jenn-Air® oven, with its powerful flow of uniform heat, is deliciously formidable.

The recipe title and the recipe shown below mention a whiskey sauce. This dessert is rich enough that you can skip the sauce which is quite whiskey intense. A trait of New Orleans, I suppose. You can reduce the amount of whiskey called for in the recipe or substitute, say , a crème anglaise.

For the whisky sauce:

TO MAKE the bread pudding, combine the sugar, cinnamon, and nutmeg in a large bowl. Beat in the eggs until smooth, then work in the heavy cream. Add the vanilla, then the bread cubes. Allow the bread to soak up the custard. 1 Scatter the raisins in the greased pan, and top with the egg mixture, which will prevent the raisins from burning. Bake for approximately 25 to 30 minutes or until the pudding has a golden-brown color and is firm to the touch. If a toothpick inserted in the pudding comes out clean, it is done. It should be moist, not runny or dry. Let cool to room temperature.

TO MAKE the sauce, bring the cream to a boil, combine the cornstarch and water, and add the mixture to the boiling cream, stirring constantly. Return to a boil, then reduce the heat and cook, stirring, for about 30 seconds, being careful not to burn the mixture. Add the sugar and bourbon, and stir. Let cool to room temperature.

TO MAKE the meringue, be certain that you use a bowl and whisk that are clean and that the egg whites are completely free of yolk. This dish needs a good, stiff meringue, and the egg whites will whip better if the chill is off them. In a large bowl or mixer, whip the egg whites and cream of tartar until foamy. Gradually add the sugar, and continue whipping until shiny and thick. Test with a clean spoon. If the whites stand up stiff, like shaving cream, when you pull out the spoon, the meringue is ready. Do not overwhip, or the whites will break down and the soufflé will not work.

IN A large bowl, break half the bread pudding into pieces using your hands or a spoon. Gently fold in a quarter of the meringue, being careful not to lose the air in the whites. Place a portion of this mixture in each of the ramekins.

PLACE the remaining bread pudding in the bowl, break into pieces, and care- I fully fold in the rest of the meringue. Top off the soufflés with this lighter mixture, to about 1 ‘A inches over the top edge of the ramekin. With a spoon, smooth and shape the tops into a dome over the ramekin rim.

BAKE immediately for approximately 20 minutes or until golden brown. Serve immediately. Using a spoon at the table, poke a hole in the top of each soufflé and spoon the room-temperature whiskey sauce into the soufflé.

BREAD NOTE: New Orleans French bread is very light and tender. Outside New Orleans, use only a light bread. If the bread is too dense, the recipe won’t work. We suggest Italian bread as the most comparable.