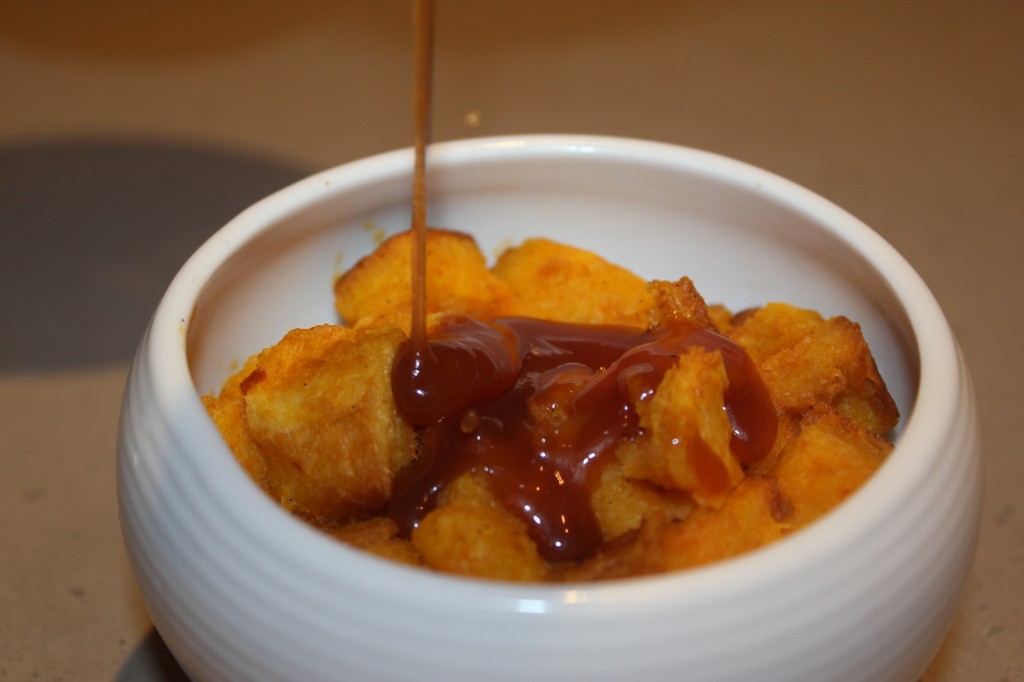 This recipe first appeared six years ago. It’s the start of fall but there are already pumpkins ready to buy. Something about “pumpkin” calls out for booze, say Bourbon Whipped Cream. Or this Whisky Hard Sauce. Start now and keep going through pumpkin season. Yes, this can substitute for Pumpkin Pie at Thanksgiving. Oh, on second thought. Supplement, not substitute.

“Suzen, the recipe you gave me said sweet potatoes. I wrote the blog based on that.”

So I am. This wonderful, wonderful dessert is made with pumpkin, not sweet potatoes. Point of full disclosure: one of us at Cooking by the Book did make it with sweet potatoes and it was fine, but it was not the same as pumpkin. So, being obedient to my wife, make this first with pumpkin.

I know that the term bread pudding can generate a cringe. But, trust me, this bread pudding is great. The recipe below suggest raisin bread, but homemade challah is very, very much better.

My suggestion here is to double down on the Hard Sauce, just ladle it on and relish in the cornucopia of rich sweet flavor. You should pour it over the bread pudding, not into your mouth. Suzen got me trying, dribbling on my shirt again, and I was chastised.

On her first bite of this treat, Suzen said, “Oh, my God.” She’s okay with dessert, but  is not a fanatic. This recipe is on her “Do Not Make” list, which mean I’ll have to beg and do work and things before we can both enjoy this. She and I would wolf it down by the bowlful.

You very well might consider this as dessert for a Sunday or holiday meal. Yes, you’ve had bread with your turkey stuffing. But, what if you went with rice for the stuffing and saved the bread for the whiskey? Just consider the possibility. And, you might just want to do a test run, too.

To make the sauce, in a large bowl use an electric mixer to cream together the butter and powdered sugar until light and fluffy. Mix in the vanilla, liquor and salt. Continue mixing until smooth and creamy. Cover and set aside.

For the bread pudding, heat the oven to 350 degrees. Coat a 2-quart baking dish or individual ramekins with cooking spray.

In a large bowl toss together the raisin bread with the pecans, then set aside.

In a small bowl, mix together the granulated sugar, cinnamon, mace, nutmeg and salt. Toss the sugar mixture over the bread and pecans, then stir well. Drizzle everything with the melted butter, then toss to evenly distribute.

In a medium bowl, whisk together the half-and-half, cream, eggs and brown sugar. Add the vanilla and sweet potatoes, then mix well. Pour the sweet potato-cream mixture over the bread mixture and stir until well blended. Let stand for about 5 minutes, then spoon into the prepared baking dish or ramekins.

As soon as the bread pudding comes out of the oven, top with hard sauce so that it melts into the crevices. Serve warm.