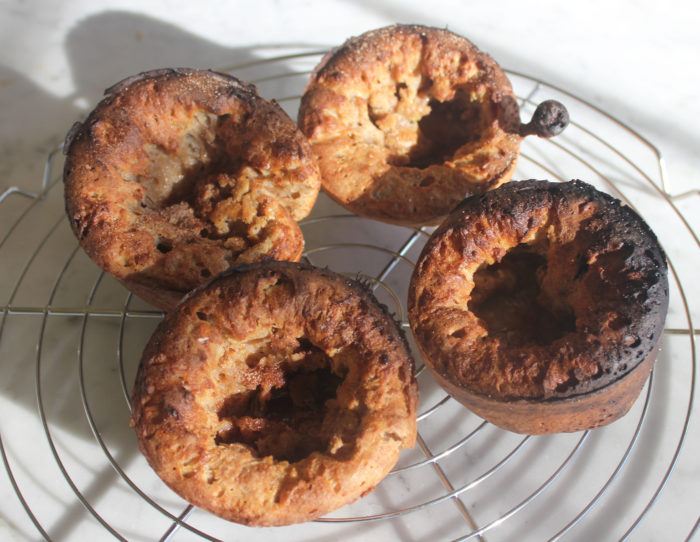 This is the fourth recipe Suzi and I tried from the wonderful Baking Style by Lisa Yockelson. I’m not going to give you more recipes from this lovely book. It was published in 2011 and you can still get your own copy. You want to.

Lisa loves intense flavors and she’s fond of cinnamon. I’ve posted about her cinnamon breakfast cake. Here the idea is much more striking: a cinnamon breakfast popover. Normally, I think of popovers as something savory to go along your main course, ala Yorkshire Pudding. Here delicacy of a popover is explored for breakfast. Light and bright, the cinnamon flavor is there but not overwhelming. Paired with espresso, it quite a subtle way to begin your day.

Bake and eat. Popover really will not save for the next day. But, they are easy to make so you can always just repeat and bake tomorrow!

For the batter, whisk the flour, salt, and cinnamon in a medium-size mixing bowl. Whisk the milk, eggs, melted butter, superfine sugar, and vanilla extract in a small mixing bowl. Pour the milk and egg mixture over the dry ingredients and combine to form a batter, using a whisk (this will be accomplished in about 15 strokes). The batter will be slightly lumpy. Refrigerate the batter, covered with a sheet of food-safe plastic wrap, for 30 minutes (or up to 3 hours).

Preheat the oven to 400 degrees F in advance of baking.

Film the bottom only of 6 large popover cups (6 cups to a pan, each cup measuring 3 inches in diameter [interior diameter, minus the lip; 3 ¾ inches in diameter if including the lip] and 2 1/2 inches deep, with a capacity of ⅔ cup) with nonstick oil spray made for high-heat cooking. Ten minutes before baking, place the prepared popover cups in the preheated oven.

Quickly and carefully, remove the pan from the oven. Divide the batter evenly among the prepared popover cups.

Place the popovers in the preheated oven, immediately raise the oven temperature to 425 degrees F, and bake for 25 to 30 minutes, or until risen, set, and deeply golden. The centers will remain slightly custardy. Resist the temptation to open the oven before 20 minutes, or the rise of the popovers will be compromised. Let the popovers stand in the pan on a cooling rack for 1 minute, then dust the tops of the popovers with the cinnamon-seasoned confectioners’ sugar (it is easiest to do this by placing the mixture in a sifter or small strainer), remove them to a breadbasket or platter, and serve.