Pickled Stuffed Eggplants from Istanbul & Beyond 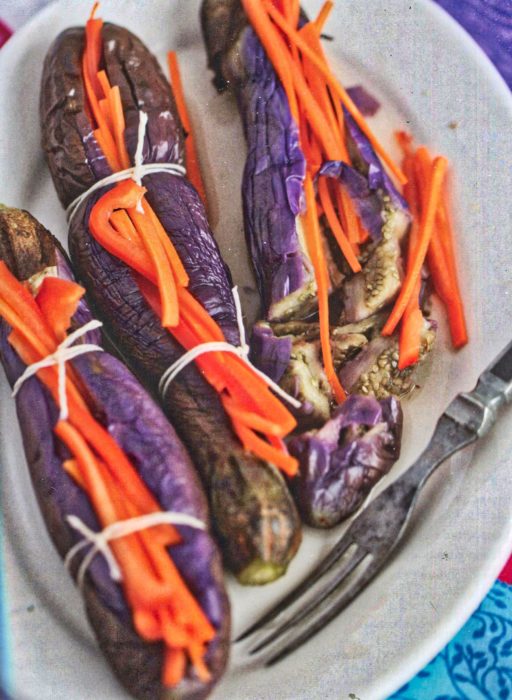 The new cookbook Istanbul & Beyond is a magnificent culinary, and cultural and photographic tour, of Turkey. It’s beautiful to see the pictures of the food, the people and the incredible landscape of a vast country.

Many Turkish recipes use ingredients we do here in America. The dishes can be similar, say a lamb stew accented with spice but given a Turkish look by being served over chickpeas. Other dishes are quite, quite distinctive. Like this one. Here, eggplants are cooked, split open, stuffed with carrots and peppers, then the assembly is tied together and brined for several days. It’s clearly beautiful and I suspect quite a competing mouthful of sour flavor and multiple textures. It’s on my to-do list and, if I can work my way down that long list, I’ll tell you how it does tease my tongue.

Perhaps this picture will entice you to pickle before me. I’d love to hear about your results!

MAKE THE PICKLES: Bring a large pot of water to a boil. Trim the eggplants but do not remove their stems. Add the eggplants to the boiling water and boil, turning occasionally, until they feel soft but not mushy when squeezed, 8 to 10 minutes.

Split them lengthwise almost in half, as if preparing a baked potato for stuffing; leave about ¾ inch uncut at each end. Use the tip of the knife to gently nudge each eggplant open and push its flesh aside to create a pouch. Push enough carrot and pepper strips into each eggplant so that some will be exposed when the eggplant is closed. With kitchen string, tie each eggplant closed in two places.

Stand the eggplants end up in a 1-quart jar. If there is a lot of room between them, wash, core, and quarter the optional red bell pepper lengthwise and shove the quarters into the jar among the eggplants to keep them upright. Add the peppercorns and the garlic clove, if using.

MAKE THE BRINE: Stir the water, vinegar, and salt together in a medium bowl until the salt is dissolved. Pour the brine over the eggplants, filling the jar to its rim. Place a small saucer or bowl over the eggplants (brine will flow out, so do this in the sink) and lower or screw the lid on to the jar.

Place the jar in a shallow bowl to catch the in the brine that will spill over during fermentation (this is normal) and let stand in a cool, dark place for at least 10 days. After opening, store the pickles in a refrigerator.