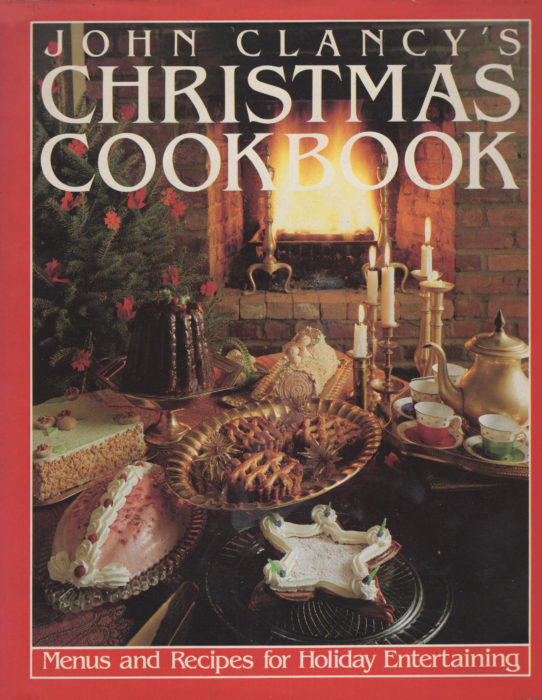 Six years ago, John Clancy passed away. He was recognized in 1981 as one of the country’s top 50 chefs by Food and Wine Magazine. He began as a chef on Cape Cod then came to New York to work and teach with James Beard. He was the chef for the famous Time-Life series Food of the World. He opened restaurants and wrote cookbooks. His mid-century influence on American culture was enormous.

I know, this is a Christmas cookbook and we haven’t had Thanksgiving. Look, my Sam’s Club had Christmas gear up before Halloween. Let’s just cut to the “shop now, please” chase.

John’s Clancy’s Christmas Cookbook, from 1982,  is more than just a Christmas book. In his forward, Clancy says he was inspired to write this holiday cookbook because of his mother’s wonderful Thanksgiving table. So, let’s think of this as a holiday cookbook filled with Clancy skills.

Clancy was an all-around chef, but baking was his passion. His baking course was said, by the New York Times, to be the best in the city.

So, this book is divided into two parts:

Preparing is about baking with sections devoted to:

The fruitcake recipe is old-fashioned, authentic and heavy. It’s a 5-pound behemoth with raisins, currants, candied lemon and orange and citron and cherries, sherry, and brown sugar. Unlike many fruitcakes, this one is sure to be excellent. It is a Clancy.

Other treats from Part One include:

In Part Two of the book, we find Christmas menus:

That’s old-fashioned to be sure and classic. And something Suzi and I might try. That Cranberry Mousseis mousse, not sauce. I’ll post the recipe later in the next few days. Beyond the berries, it uses cranberry juice, unflavored gelatin, egg whites, and heavy cream.

For Christmas Day Breakfast, one menu suggestion is most exciting:

That hash uses potatoes with leftover roast beef or lamb plus diced ham. And the “mess” is sided with raw egg yolks sitting in half shells. You pick up a shell and pour onto your hash. Those Broiled Grapefruit are adorned with a mixture of honey, butter, and kirsch.

The Traditional Dinners suggestions include this German Menu:

Roast Goose with Pears and Prunes

If the holidays cause you stress, if you don’t know how to assemble a feast, then these Clancy treasures await you in a classic cookbook.