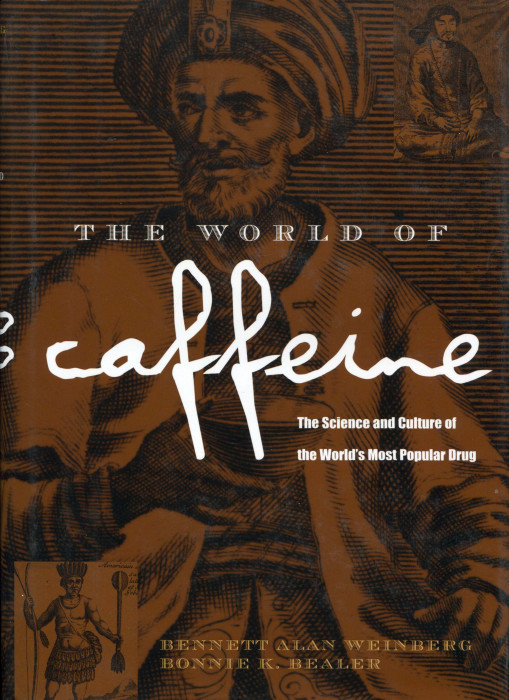 I’ll place a bet with you. Go to your smart phone or tablet and open up Google maps. Then search for “Starbucks.” How many Starbucks places are there within just one mile of where you live?

Is there one? Two, perhaps? Golly, you have five?

I live in Tribeca in Lower Manhattan and within one mile of me there are 33 Starbucks. More on the way I assume and there are at a dozen other coffee/tea places nestled here and there.

Caffeine it turns out really is the world’s most popular drug. Which is the subtitle of The World of Caffeine from Bennett Alan Weinberg and Bonnie K. Bealer. Published in 2001, this book has become ever more interesting and pertinent in our very coffee world. And hot chocolate, too, for caffeine is the driving chemical in that wonder as well. And tea, I know, although it’s something I am not fond of. [Suzi likes chai with Scotch – more on that in another blog].

Caffeine is divided in five parts:

You can read the whole book, from beginning to end, or just drift around, mixing and matching as your interest piques.

I happen to love the very last chapter: Caffeine Dependence, Intoxication and Toxicity. An 1893 study already focused on caffeine addiction. Take away the morning coffee and people experience: sleepiness, work difficulty, irritability [or is that IRRITABILITY], decreased sociability, and flulike symptoms. For well over a century, more and more research has gone into studies on these effects. In our modern world of science with all kinds of chemical analysis possible, we know the molecules that apply and how the pathways to our brains are affected. Yes, toxic, too. Drink too much caffeine and you die. Something to ponder during your next sips.

Yet we drink away.

The very word, caffeine, comes from the French café. And surprisingly, the word only appeared around 1850. Before that, we talked about coffee, the beverage. Now we are so much more scientific so we drink the coffee but we analyze the caffeine.

Coffee was rapidly embraced in Western Europe, beginning in the late 1500’s. So rapidly that the coffee trade actually supplanted the spice trade. Many of us can go a whole day or two without some cinnamon or nutmeg, but take away our coffee and … Well, we become a tad unsocial.

And coffee had some immediate benefits. In the 1500’s and beyond, a lot of beer was consumed because it was a healthier alternative to raw water which was often heavily contaminated. Water could make you sick. Beer, with its alcohol, could make you happy. And eventually fat. Coffee was better alternative: no alcohol to slow you down, the stimulation of the caffeine, and no calories unless you poured on the sugar.

At 350 pages, Caffeine will take you a few cups to work your way through. It’s well written and dense with facts, figures, history, and entertainment. And perhaps more than any of the other coffee tomes out there, it does answer that basic question of life: why are there so many Starbucks out there?